During this period of restrictions, why do not spend our time with some good readings?
In this increasingly digital world, we often forget to take a book, get comfortable and read a little. So, today I’d like to talk about a novel I read few months ago, titled “The Roots of Heaven” by Romain Gary.
Written in the 1950s, it is considered one of the first ecological novels in history. Not by chance, the core of the novel turns around a very interesting debate, which is described not only from an ecological point of view, but also from multiple perspectives. The protagonists of the debate are two opposing figures: on the one hand Morel, white defender of the great herds of elephants of Chad, who defends against everything and everyone through paper petitions and punitive expeditions; on the other hand, the black Waitari, intellectual graduate of Sorbonne in Paris, who dreams the industrial and economic independence of Africa, which is no longer the “zoological garden of the world” but a land of industries and civilizations.
The topics covered are many: such as racism, ideologies, awareness of the autonomy of African peoples, the traumas of the Second World War, the preservation of the natural environment, progress and its consequences. Therefore, the heart of the debate is the technological and industrial independence of Africa, always seen by Westerners as a “zoological garden” precisely, which must be protected and respected. But how is it possible to progress by creating infrastructure, trade routes, cities, factories and skyscrapers in the elephant habitat?
“This is impossible” would say the ecologists and the animalists. Today, many protected and endangered species live in Africa, it is unthinkable to raze to the ground such a habitat for the progress. “Today”, exactly, because in the end it’s always a matter of time.
Let’s think about five centuries ago, a group of Spanish, Portuguese, English and French begin to colonize a new world: “The Americas”. But where are now the animals and clans populating those lands?
In XV and XVI centuries, Europeans exterminated entire indigenous peoples and animals, which populated American soil. They were people just like them, it is not by chance that we are talking about American holocaust. Perhaps, if in XV century, someone decided to invest and create new infrastructure in Africa, today this continent would not be considered a zoo. This is because probably the elephants would not exist anymore, or almost more, exactly like the buffalo and the Indians. So where is the solution? How do you resolve such a debate? Is it right to protect the

species that inhabit such a vast territory, “hindering” the progress of a civilization, or maybe those people have the right to expand, build and progress just as we Westerners did centuries ago?
As an optimistic young student, I find all the answers to these questions in sustainability. I am convinced that in 2021 progress is possible with respect for the other indigenous peoples and the existing fauna. Sustainable development exists and is possible, it is also a reality within the 17 Sustainable Development Goals (SDGs)1 of the UN 2030 Agenda. These objectives were identified by the UN in 2015 with a horizon that reaches up to 2030. According to the UN, sustainable development is defined as “a development that meets the needs of the present without compromising the ability of future generations to meet their needs”.
In order to achieve these objectives, three dimensions need to be harmonised: economic growth, social inclusion and environmental protection. For this reason, it is important to foster dialogue and communication between young Italian and African entrepreneurs, so that they can start a joint business and above all can grow together. I am convinced that it is only through mutual collaboration and synergy that we can see the implementation of strategies to reduce inequalities, stimulate economic growth and development for all.
“You’re right. One has to be mad. […] Do you remember about the prehistoric reptile, the ancestor of man, the first to emerge from the mud in early Palaeozoic times, a milliard years ago, who set out to live in the air and to breathe, even though he had no lungs? […] Well, he was mad too. Absolutely bats. That’s why he tried. He’s the ancestor of us all, and we shouldn’t forget it. But for him we wouldn’t be here. He was as crazy as they come. We too have got to try. That’s what progress is. By trying like him, perhaps we’ll wind up with the necessary organs, the organ of dignity, of decency, or of fraternity.” 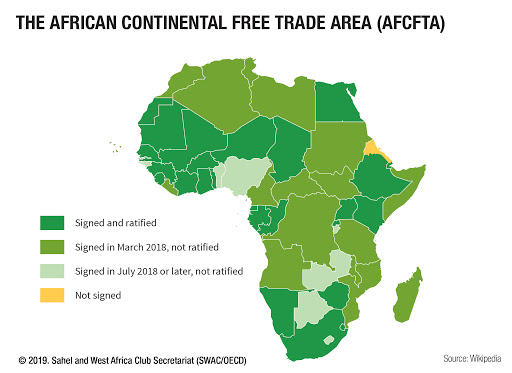 AfCFTA and UE: An Economic Perspective

On January 1st, 2021 the African Continental Free Trade Area (AfCFTA) has become effective. What effects there could be on the economic relations with the …